Protecting forest for the benefit of climate, people, and nature in Paraguay (ParLu) is a four-year project implemented by WWF-Paraguay, supported by WWF-Germany and funded by the German Federal Ministry for the Environment, Nature Conservation, Building and Nuclear Safety (BMUB). This project seeks the integration between human activities and forest conservation. Its primary mission is the design and development of measures for integration within the REDD+ focus (Reducing Emissions from Deforestation and Degradation), with an adaptable approach for various political, social and economic factors, promoting pilot projects in the Atlantic Forest and the Pantanal, and also supporting the scheme of payments for environmental services.


Media Campaign “A country after the rain”

In November 2013, WWF-Paraguay began broadcasting a series of 12 radio spots as part of Output 8 activities of the ParLU project. These spots helped educate the public on the basic concepts of Climate Change and the functions of forests. This activity was an initial step in promoting a subsequent national awareness campaign. In the beginning of 2014, WWF-Paraguay initiated a partnership with Augusto Roa Bastos Foundation to develop an awareness campaign based on an unpublished environmental book written by Augusto Roa Bastos (1917 – 2005), the most recognized Paraguayan novelist. Before his death, A. Roa Bastos wrote the book Ecologia y Cultura (Ecology and culture) that exposes the dramatic change in the Eastern Region forest due to agricultural expansion and the arrival of industries in the 20th century. Thanks to the partnership between WWF-Paraguay and Augusto Roa Bastos Foundation, Ecología y Cultural was published posthumously in 2014. Based on the author’s own reflections, WWF-Paraguay proposed a communication campaign with the goal of communicating the value and importance of forests and biodiversity in modern times. Read here more about objectives and results from the campaign.

Spot 1: “A country after the rain”

Paraguay’s capital Asuncion was recently named one of the hottest in the world. In the past 50 years, 80% of the country’s native forest was destroyed – less trees means more heat. But neither politicians, opinion leaders nor people seem to be aware of this. To raise awareness  about the impacts of global warming on their ecosystems, WWF Paraguay and ONIRIA\TBWA Paraguay prepared a lunch cooked directly over hot street asphalt: The Global Warming Menu.

Here you find a compilation of maps of the ParLu project. Please use the copyright WWF Paraguay.

Indigenous and rural communities where the ParLU project is being implemented:

The project study area corresponds to the Atlantic Rainforest of the Alto Paraná eco-region in which five pilot areas are situated:

The project study area corresponds to the eco-regions of the Pantanal and the Cerrado which cover five districts: Bahía Negra Bay, Fuerte Olimpo, Carmelo Peralta and La Victoria in Alto Paraguay Department, and a small portion of Pinasco in the Department Presidente Hayes. The surface covers 5,428,524 ha. The project pilot area of Bahia Negra is situated in this eco-region.

Estimation of carbon stock and cover map for the eco-regions of the Pantanal and the Cerrado in 2014: 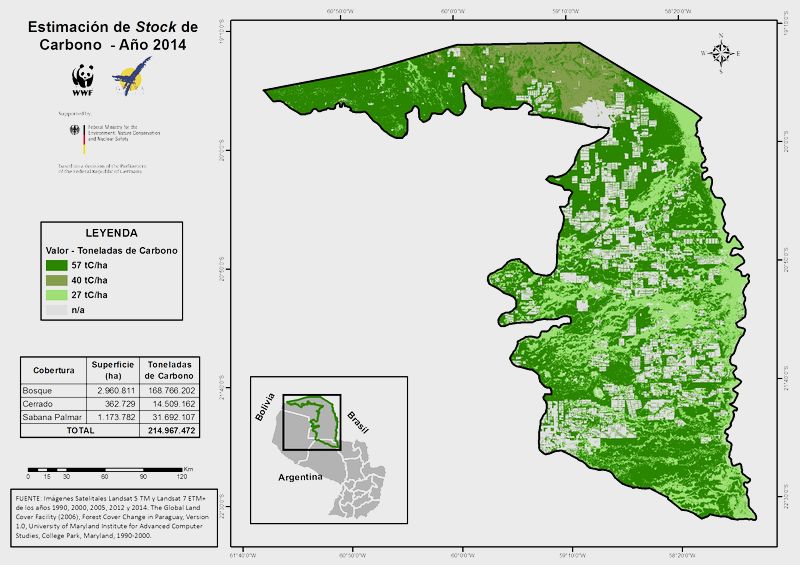 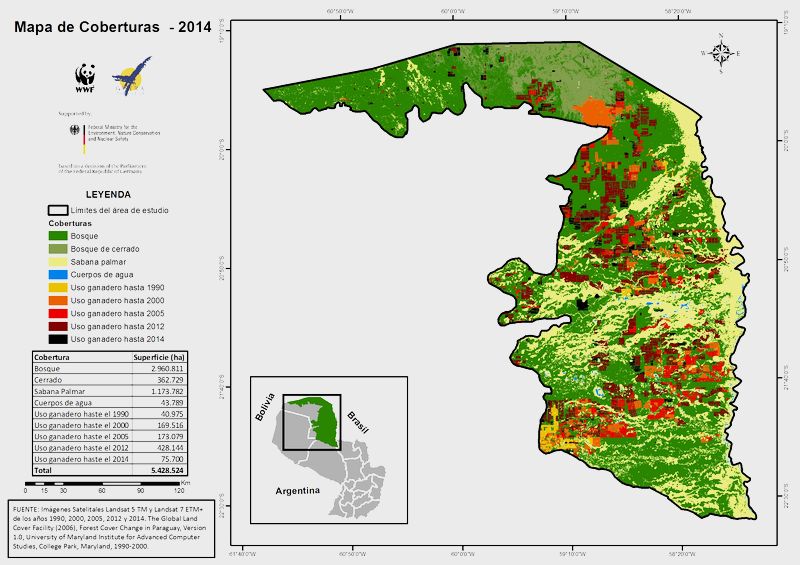 Estimations of Carbon Stock in the Pilot Area of Bahia Negra 1990-2014: